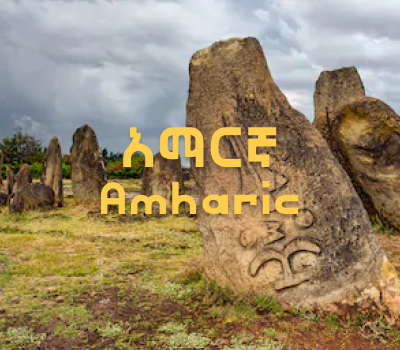 Amharic is a Semitic language which is a member of Afroasiatic languages. Ge’ez is the forebear language and writing script of the Amharic, Tigrigna and other semetic languages in Ethiopia. It is also the solemn language of the Ethiopian and Eritrean Orthodox Tewahedo churches. The Amharic language spread its influence when the Ethiopian Empire shifted its base from Axum to Amhara around 11th Century A.D. It has been the official tongue of Ethiopia since the 14th Century AD. Most Amharic speakers also speak English, Afaan Oromo, Tigrinya and Arabic. Amharic is the third most spoken African language in the United States after Swahili and Yoruba. There are also a large number of Amharic speakers in Israel, Italy and several other European countries.

Amharic literature, especially poetry and songs can be traced back to the fourteenth century with the best and most significant entering the scene around the nineteenth century. As Ethiopia’s national language, it’s used as a second language by approximately 25 million people most of whom are based in Ethiopia; many others are spread around the world in countries such as Sweden, Canada, USA and Eritrea. The Amhara region in northern Ethiopia renders its name to the language and a critical heart and base of Amharic.

There are several closely related dialects of Amharic spoken in Ethiopia. The dialects in the central part and main cities of Ethiopia are influenced by Afan Oromo, Agawe and Arabic languages. Recently, English has been increasingly influencing the Amharic language. Amharic is written left to right and is supported by UTF-8 encoding making it readable by internet browsers and computer programs. It is also supported by Google translate and Gboard.

Amharic can be written easily with Fidel, a Ge’ez script and alphabet where every character denotes a consonant and vowel order in as much as it’s the consonant that determines the shape a character will take. Visit our homepage to learn more about the Amharic alphabet.

In Amharic, alphabets or letters are visible in a grid system where consonants appear vertically and vowels in a horizontal fashion. The grid below offers a simple and quick way of understanding Amharic and getting to comprehend it for the purpose of proper articulation of sounds.

In Amharic, there’s a clear distinction of gender such as “እኔ” (ǝne) in Amharic which translates to “I” in English or “እሷ” (ǝsswa) in Amharic translating into “she” in English, including different ways of distinguishing numbers and persons.

Place of Gemination in Amharic

Most Semitic languages, including Amharic have a contrastive effect resulting from the articulation of consonants known as gemination, which helps in differentiating words mostly through consonant lengthening. Gemination is different from stress and ensures a consonant sound’s articulation is longer.

Note that while Amharic writing doesn’t really indicate gemination in written form a typical reader of the Ethiopian national language would hardly have a problem with it, the same as in Hebrew, Bantu tongues and even Arabic where gemination isn’t specified in orthography.

There’s an easy agreement between subjects and verbs in Amharic where the subject’s gender, number or person are marked and indicated using a verb prefix or suffix. Not that affixes are also present in Amharic but due to their huge variation between the verb and subject they aren’t really seen as pronouns.

In a nutshell, Amharic follows the pattern of other Semitic tongues in verbs where suffixes and prefixes are used to help distinguish masculinity and femininity (essentially gender), numbers and persons.

Nouns and Gender in Amharic

When it comes to nouns, Amharic usually has derived or primary nouns. It means that a noun could be primary like “leg” in Amharic (ǝgǝr) while others are simply derived forms such as “pedestrian”, (ǝgr-äñña).

Like in most languages, gender in Amharic is either feminine or masculine and expressed in diverse ways. A number of adjectives and nouns end up with a marker that signifies femininity, such as “bäg” for ram and “bäg-it” for ewe.  In essence, femininity in the language doesn’t just help to distinguish the sex of the subject but helpful when indicating the smallness of a subject, compassion or tenderness.

Amharic expresses plural mostly using the “–očč” suffix with interchanges incorporated depending on the vowel or consonant at the end. For instance, when a noun has a consonant at the end, just “-očč” is used. If the ending is a back vowel such as –u, -o or –a, the plural suffix is usually “-ʷočč” while frontal vowel ending nouns either take the “-yočč” suffix or “-ʷočč”.

As in any language, there’s so much to Amharic in terms of consonants and vowel sounds, subject, verbs, syntax, grammar and everything else in between. Even so, it can be learned and understood without a problem, especially in practice.